This past weekend we were gathering sandbags, packing up anything that could get damaged – the art, custom woodwork and leather goods, and putting up all of the t-shirts, sweatshirts and Asheville apparel up above 3 feet. You might be wondering why? Well, we in Biltmore Village, like many other parts of the country, have been effected by the storm Joaquin. Asheville has been getting a ton of rain, coming down in buckets and because of where we are located, where the Swannanoa comes in to the French Broad River there was a threat of flooding which could potentially put Biltmore Village under water.

Flooding, in Asheville… not possible? That is what many thought in 2004 when the Village was flooded with several feet of water, many lost everything. Friends of ours from the Village Wayside, share stories about cars being taken down the street by the water, people coming together to help one another and the shock and devastation. People weren’t prepared at that time because  Biltmore Village hadn’t seen a flood since 1916 and even that was unfathomable. Here is a partial account from Kathleen Lipe Carter (1898-1989) – “Before dawn on the 16th, my sister, Bess, and I found Papa securing some chickens and turkeys on the front porch. Already, sightseers from the village were wading near the house to view the swollen river. With Papa, we joined a group of forestry students and young people heading into the village. To my surprise, as we crossed the train tracks, the water became deeper, the current more swift. Our group held hands, keeping our backs to the current, and struck out across the Village Green, hoping to reach high ground beyond the lodge gate to the Biltmore Estate. By the time we reached Lodge Street, the water was almost over our heads. Torrents from broken dams upriver had changed the course of the Swannanoa. We were caught in the middle of a wide, wild river” Story by MainStreet Online feature writer, Lyn Leslie.

As I watch the news and see the current devastation in our sister city of Charleston, SC my heart aches for each and every person who is under water, without power, without a roof over their head, or a safe place to sleep. I am caught off guard by the pastor shown pulling a casket across a former street turned into a river, “that is someone’s family out there”. I am comforted to see people lending a hand, being human and serving one another in need. It inspired me to help a homeless man who was just drenched, sharing some clean clothes and a rain jacket, I think his smile said it all, but he was just grateful for someone to notice him.

Luckily for us, even though we broke the record for amount of rain in a day at 2.23 inches, beating the old record from 1961 of 1.63 inches flooding didn’t happen; we got a chance to sweep and mop in all of corners!

Be good to one another, be grateful for a warm dry place to lay your head, be brave to offer a lending hand or even just a smile and hello. Be human folks. 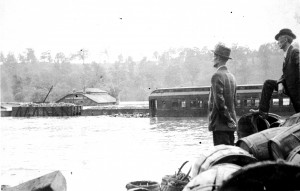 ALL THE PEOPLE COULD DO AFTER THEY FLED TO SAFETY WAS WATCH THEIR HOMES AND TOWNS WASH AWAY.
PHOTOGRAPH COURTESY OF THE STATE ARCHIVES OF NORTH CAROLINA.